Mikey does not play with toys, does not watch tv, use a computer, play video games. Mikey is a hyper child and needs to be watched all the time. There is no break, Mikey must be kept occupied and it is exhausting.  At night when I am so tired, physically mentally drained is when, in a normal world, people feed and bath their children, tuck them into bed, maybe a bedtime story, not for us. After 5 years I managed to get Mikey to stay in his bedroom at night, at least. That equates to two years of Mikey screaming, kicking, scratching his face and causing absolute havoc until 4 am (most nights). His record so far is 72 hour tantrum with no break. Broken beds and smashed wardrobes meant all that was in his room was one big mattress. Curtains, then blinds, back to curtains pulled down and ripped every night. Holes kicked into the walls. Light fittings smashed, at night I had to trip the lights upstairs at the mains. Climbing onto the windowsill and throwing himself to the floor....the noise, so much noise, the screeching. Eventually he would fall asleep, usually in the corner or behind the door.
I would sneak into his room to make sure he was ok then sneak out and leave him to sleep where he was. To wake Mikey up and move him onto the mattress would mean no sleep at all and by this time I would be lucky to get two or three hours. Noise sensitivity in Mikey's Autism meant that even the slightest creaking of the floor boards would wake Mikey and send him flying into a rage. For the longest time I dared not flush a toilet when Mikey was asleep. I tiptoed and crept around like a ninja with blurry tired eyes.  The last time Mikey had a nap he was four months old. I tried so hard to calm him into sleep. I used to lay him down and comb his hair for hours on end just to get an hours sleep out of him. And the poop, so many nights cleaning and scrubbing sometimes four times in a row. Tried nappies, jumpsuits, all got ripped and torn.

Toilet training took 10 years of constant battles, he is there but not 100 percent yet. Horrible subject but a severe fact of life for those of us having to try and cope with it. My hands were very often so raw, skin peeling off from all the cleaning. Latex cleaning gloves I'd developed a reaction to which means I got to choose from raw skin or small blisters everywhere...oh the joys! Nowadays when I see Mikey taking himself to the toilet, it makes me feel like a champion, victorious and so proud. So many told me he would never be able to do it, never make progress but he has proved them all wrong and those who care about him never gave up on him. To anyone who may come across this blog and are going through some of what we did, take heart dear reader because it does get better and everyone on the Autism Spectrum is a unique individual, they may share the same traits but are still as individual as everyone else on this earth.

I understand folks putting a brave face on, I also know that by not expressing just how difficult life with Autism can be, care givers have to work so much harder to get services and rights for their children because, hey, it's not that bad, is it? - Yes, it very often is. 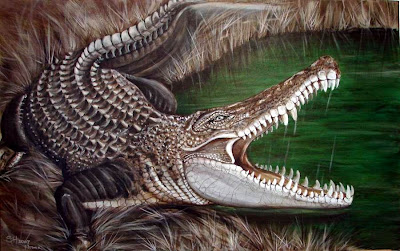 Mother - Acrylic on Canvas 30" x 40"
Mother
The recurring nightmare. Every dream I had, over the top wonderful experiences like a endless water park with rides and rivers taking gleeful people down their gentle currents on big floaty happy tubes, trips to wonderful forests with good friends, a romantic evening in a park with a lover in the soft warm glow of japanese lanterns and blossoming cherry trees.....would suddenly take a turn into a scenario where  everyone was being pursued, hunted and viciously ripped apart and eaten by crocodiles.
For months the nightmares came then one day I saw the painting in my head, unfolding itself and I knew to paint Her would get her out of my dreams. I say "Her" where, in fact, Mother is a self portrait.
For weeks I studied saltwater crocodiles, watched everything I could on them. I knew what my composition had to be so I learned how crocodiles move, behave in order to render her without a reference photo. What you would face if you happened upon a crocodile's young...

In case you are wondering, ever since the crocodile made her way onto the canvas I do not have those nightmares anymore. However, I have to still get a hyper real life size bleary eyed Ninja to live at the bottom of my garden, I think I will call him "Guardian of the House of Flying Underpants".
Posted by Samantha Anne Hutchinson at 11:57

Samantha! you have stunned me into silence and I honestly don't know what to say. I really had no idea whatsoever about what you have had to deal with.

I'll let your words sink in for a while and make an intelligent response later.(If I can).

During those 8 weeks with you before and after Katie's birth, I lived this terrible time of trial with you and Mikey. The cupboards being pushed down the stairs (who can believe the super human strength of the rage of autism), the groaning walls, rattling light fittings and the celing shuddering as if the jumping boy would burst right through from the top floor. Then the continuous thudding in the darknes, like a really bad headache, as he kicked the hole in his bedroom wall. In your final stages of a very difficult pregnancy you repaired and patched and painted - all to no avail - nothing could withstand the next night's onslaught. I marvelled at your courage then, and still do, as you sweep and wash, cook, clean, wipe up poo, and sadly pick up the pieces of smashed treasures - not once a day, but continuously. But then Mikey calms down and the angel smiles and kisses your hairline, and that magic moment lives on in your soul.

Well, I'm still staggered. I just read your post again and it made me realise what a lucky, shaded life I've led. I thought things would have been tough for you but not to the extent you have described. It has opened my eyes and I can't tell you how much I admire the way you have handled such adversity. You sound so level headed and positive about everything. I know that lesser beings would have buckled long ago.

I can see why the time spent pursuing your art is so precious to you. It must have provided small opportunities to escape every now and then, and also enable you to exorcise the demons like 'Mother' appears to have done.

In the music world, it is said the blues would never have been born if the old blues masters had not suffered for their art.

In time you may find that your experiences will shape your art and take you in directions that many of us just dream about. It will be interesting to see how it develops in the future.

I'm so touched by your post, I really don't know what else to say. Sorry.

John I am one of the few fortunate ones who gets help now. Ok I had to go through courts and fight battle after battle, ongoing, to force schools, doctors and children's disability services to help me. I had the nervous breakdown. Mikey has amazing carers for part of the week now and he is happy, which is paramount. I finally have equipment..after a two and a half year battle, which means we sleep at night! I am feeling positive and maybe that's why I can finally write about the experiences. Shocking, perhaps but to us, the government taking services away from disabled kids is also shocking. Maybe someone like me highlighting how bad things can be will help another family get the help they simply have to have to survive? At the same time as being bad, life with Mikey is also surreal and magical...hopefully I can convey that side too.
Thank you so much for your comments John

I’m not that much of a online reader to be honest but your blogs really nice, keep it up!
I'll go ahead and bookmark your site to come back in the future. All the best

Fastidious answers in return of this question with real arguments and explaining the whole
thing regarding that.

Autism, Art and Me

Welcome to my Blog. This blog tells a story about my sons Autism and my Art relating to it. I hope it will give some insight into the world of Autism through Art.

Samantha Anne Hutchinson
I am an artist living and creating art in Ponders End, Enfield, North London. I have an overwhelming desire to create art and express myself through line, shapes and colour.

All the text and images used on this site are subject to copyright. Duplication and or use without permission is strictly forbidden.