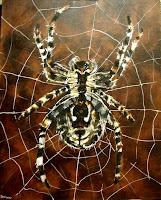 Spider, WaterColour on Canvas Board
It was a fine day in autumn, 2007, bright and still warm enough for Mikey to be out in the garden. His favourite place to be. I can leave him outside there by himself for short periods of time, (short periods of time in our world never amounts to more than three and a half minutes, or so) the fences are high and the garden itself is small and Mikey cannot escape. Mikey loves mud and sand to the point of obsession. Fist fulls of mud usually get distributed on everything that has a surface which means practically, well, everything. Mikey does not like wearing much in the line of clothing and at every opportunity will gift my neighbours with a pair of flying underpants over the fence, the pairs that don't make it over to the other side end up in the trees and there they sway until nature swallows them. Fortunately my neighbours are very understanding, they wait until there are a few pairs then quietly drop them in a neat pile back over the fence. I used to get awfully embarassed about it, nothing quite like wandering around your yard in peace only to be hit by a pair of underpants out of nowhere. Mikey needs to be watched all the time.

On this day I noticed a big spider spinning a web, an amazing thing to watch. With Mikey down at the bottom of the garden, happily drizzling dirt onto a piece of paper I went inside and got my camera and tripod. I love photographing scenes like spiders spinning webs! I carefully set the camera onto the tripod, take a few minutes to line the shot up, get the macro functions on the camera focused, the light is right and I could feel that little flutter of excitement you get when looking through a viewfinder and thinking "this will be a great shot!" I clicked off one shot and with my eye still looking through the viewfinder I saw one swift blur of a hand reach out and pluck the spider off its web. My head popped up and I felt my eyeballs bulge out of their sockets when, as if in slow motion but in actual time, Mikey turned the spider towards his face gave it a fleeting glance then placed the spider in his mouth, and swallowed. Mikey has swallowed a great ecclectic mix of items but never a living thing, well there was that time he bit into a snail but I got to his mouth in time to remove the unfortunate snail, a crushed shell but still alive. 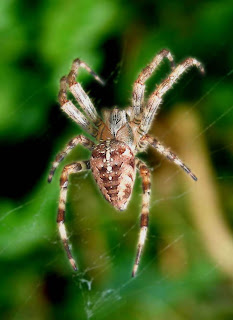 This is the Photo, it did turn out to be ok, unlike the Spider!
Mikey went back to his spot and continued on his mud drizzling quest as if nothing happened. I felt bad for the spider, really bad. So I painted it, using water colours and the picture is hanging next to the kitchen door leading to the garden. As an apology to the spider world and a warning to others to avoid the sparkling blue eyed spider munching boy. 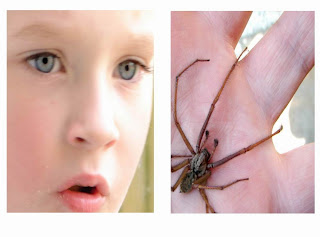 Posted by Samantha Anne Hutchinson at 20:07

I'm going to enjoy reading your blog Samantha. You've painted quite a surreal picture in my mind with your words. The underpants tree, the mud, the little blue eyed spider muncher. Hmmm. I can see this is going to get quite interesting.

This is a really funny one, and you tell it so well, Sams. The bleary eyed Ninja could multi-skill - sneaking around the house at night with his sleep potion, gobbling up flying underpants and misplaced poo, guarding playing children, and calming stressed Moms.
Love Mom

Shew... u are one special mom

This excellent website certainly has all the info I wanted about this subject and didn't know who to ask.

Hello! This is my 1st comment here so I just
wanted to give a quick shout out and say I really enjoy
reading your posts. Can you recommend any other blogs/websites/forums
that cover the same subjects? Thanks a lot!

Not only can it raise the speed at which we get rid of fat, its' unique enzyme boosting formulation sends messages to your brain to inform us that we're not hungry.

Add this healthy lifestyle using a Thermogenic Fat Burner and you'll lose weight quicker and possess the body you have always dreamed about. What is really illegal is always to purchase weight reduction pills which contain Phentermine without getting any prescription correctly from a licensed specialist.

Does your website have a contact page? I'm having a tough time locating it but, I'd
like to shoot you an email. I've got some creative ideas for your blog you might be interested in hearing. Either way, great site and I look forward to seeing it develop over time.

This is a topic that is close to my heart... Cheers!
Exactly where are your contact details though?

I constantly emailed this web site post page to all my associates, as if like to
read it next my friends will too.

I have read so many articles or reviews about the blogger lovers however this article
is genuinely a good paragraph, keep it up.

Wow, amazing blog layout! How long have you been blogging for?
you make blogging look easy. The overall look of your site is fantastic, let alone the content!

I read this article completely about the comparison
of latest and earlier technologies, it's awesome article.

Autism, Art and Me

Welcome to my Blog. This blog tells a story about my sons Autism and my Art relating to it. I hope it will give some insight into the world of Autism through Art.

Samantha Anne Hutchinson
I am an artist living and creating art in Ponders End, Enfield, North London. I have an overwhelming desire to create art and express myself through line, shapes and colour.

All the text and images used on this site are subject to copyright. Duplication and or use without permission is strictly forbidden.